On 3 March 1942, temperatures stayed below freezing over much of the Midlands and Southern England.

My birth certificate indicates that I began my life outside of the womb on 3 March 1942 at Matlock.

In fact, I was born at Willersley Castle in Cromford, a few miles down the road from Matlock, the births registration centre sub-district which takes in Cromford. This is in the county of Derbyshire in England, on the edge of what is known as the Peak District.

My birth certificate records that my dad, James William Rope, was Gunner 1076690 Royal Artillery (Laundryman) at that time. My mother was Eileen Elsie (nee Davey). So, the first days of my life were spent in Willersley Castle. Dad was in the army at that time but not overseas, so was able to obtain leave to come and visit mum and meet me.

Of course, at the same time as I emerged into the world, another far more significant event was happening – World War II. On the day I was born, a supplement to the London Gazette announced “The KING has been graciously pleased to approve the following awards: — Distinguished Flying Cross. Wing Commander Henry Neville Gynes RAMSBOTTOM-ISHERWOOD, A.F.C. (29116). Squadron Leader Anthony Garforth MILLER (90088), Auxiliary Air Force, No. 134 Squadron. Acting Squadron Leader Anthony Hartwell ROOK (90071), Auxiliary Air Force, No. 81 Squadron. The above awards are for gallantry and devotion to duty in the execution of air operations.”

3 March 1942 was also the night of a major RAF raid on the Renault works in Paris.

Image above and words immediately below sourced from http://ww2today.com/3rd-march-1942-the-rafs-largest-raid-so-far-on-paris#sthash.MeJ001ii.dpuf.

Annotated vertical taken during night raid on the Renault works at Boulogne-Billancourt, west of the centre of Paris. The largest number of RAF aircraft sent to a single target at that point in the war – 235 – were despatched, dropping a record tonnage of bombs. A significant development was the mass use of flares to illuminate the target (‘1’ and ‘2’). Smoke and flame from exploding bombs can be seen on the factory (‘3’), and also on the Ile St Germain (‘4’ and ‘5’). Only one aircraft, a Vickers Wellington, was lost during the raid, which was judged to be a great success.

Another event on 3 March 1942, but on the other side of the world in a country that was to become my future home, saw Japanese fighter aircraft, fresh from their victories in the then Dutch East Indies, attack Broome in Western Australia. Nine Japanese Zero planes strafed the town, planning to destroy the aerodrome and American planes. With no notice, the townsfolk could only put up minimal opposition and in an attack that lasted only an hour, almost one hundred men, women and children lost their lives. Not a single operational aircraft remained in Broome. The town itself was reduced to ruins. The full story of this has been told in “The Ghosts of Roebuck bay” by Ian W. Shaw, a Canberra writer.

So, I was born a “pommy” and, later, became an “aussie”. To start at the beginning and explain why I was born in a castle, it is necessary to provide some relevant history.

Once upon a time there was a famous Mothers’ Hospital in London. It traces its origins to the work for unmarried mothers begun in the earliest days of the Salvation Army. ‘Refuge Homes’ for poor and destitute women were provided in private houses in various parts of London. As part of this scheme the Salvation Army established a home at Ivy House, Mare Street, Hackney in 1884. Many of the women seeking shelter there were pregnant, and in 1888 the Salvation Army decided to dedicate Ivy House to the confinement of unmarried mothers.

Although maternity hospitals had existed in Britain since the eighteenth century, these were almost entirely reserved for married mothers only. This was the first time that maternity hospital facilities had been combined with a ‘Home of Refuge’.

The hospital trained its first student midwife in 1889 and more than 250 pupil midwives graduated from the school during its eighteen year’s existence at Ivy House. During this period, the hospital continued to expand, and more buildings were bought.

One of the later developments was a mother-and-baby home called Cotland, based at 11 Springfield Road, Upper Clapton. It existed between 1912 and 1920, and many of the women mentioned in the records of the Mothers’ Hospital gave Cotland as an address.

Finally, the Salvation Army purchased land in Lower Clapton Road, London E5 in order to build a hospital dedicated to unmarried mothers. In 1912, the foundation stone for the new Mothers’ Hospital was laid by Princess Louise, daughter to Queen Victoria, and the Hospital was officially opened in 1913. Designed for 600 births per year, it soon outgrew its facilities and various extensions were made over the years.

The new hospital continued to uphold the teaching tradition of Ivy House and midwives were trained to the standards of the London Obstetrical Society and of the Central Midwives Board (CMB). Pupils attended classes for Parts I and II of the examinations of the CMB and gained experience both on the wards and in District work.

Between the two World Wars, many improvements and additions were made. In 1921, the new Nurses’ Home and Theatre were opened by Queen Mary. By the 1930s, the number of births had risen to 2,000 per annum. The hospital suffered damage during the Second World War, but fortunately there was no great loss of life.

Although the hospital remained in service throughout the war for those who did not leave London, arrangements were made for evacuations to Willersley Castle in Matlock, Derbyshire and to Bragborough Hall, Northamptonshire.

Willersley Castle itself has a most interesting history. Its construction began in 1790, commissioned by Sir Richard Arkwright, the great industrialist who developed the Water Frame which revolutionised the cotton milling industry in this country and all around the world. In 1791 a fire broke out causing severe damage to part of the interior of the castle, a major setback in construction. The damage was repaired, but sadly Arkwright died in 1792 before completion of the building. His son, also named Richard, moved into Willersley Castle with his family in 1796 and the family continued to live there until 1922.

In 1927 a group of Methodist businessmen bought Willersley Castle as a Methodist Guild Holiday Centre and opened its doors on the 5th May 1928. It became a popular location for young Methodists, with its tennis courts, bowling green, games field and organised excursions in the Peak District proving a real success.

As I’ve already described, during the Second World War the Castle was used as a Maternity Hospital by the Salvation Army. Over four thousand babies were born at Willersley between 1940 and 1946.

Many of the original features could still be seen when I visited Willersley Castle in 1978 and, again, in 2006. In 1978 it was a place where young underprivileged girls were given holidays. I chanced to visit on an Open Day and managed to sneak in through the gate without an invitation ticket but could not get inside the building.

I had better luck in 2006, by when it had become part of a chain of temperance hotels operated by Christian Guild (a trading name for Methodist Guild Holidays). It was, and still is, a popular hotel. In addition to providing holidays, it also catered for residential conferences, day conferences, coach parties and group meals.

It is now possible to visit without staying there. Willersley is open every day, 365 days a year, for coffee and lunch and afternoon tea. Management says that l inks with the past are never far away: a special break every year sees the return and reunion of Willersley Babies – those like me who were born there when it was a maternity hospital.

‘People kept visiting and saying, “I’ve come here because it’s on my birth certificate”. So, we investigated a bit and put it out there and said, why not invite them? Some come just once, some come every year. It’s lovely.’

I did not stay there but did go inside and have a look around and speak with staff about having been one of the 4,000 babies born there. 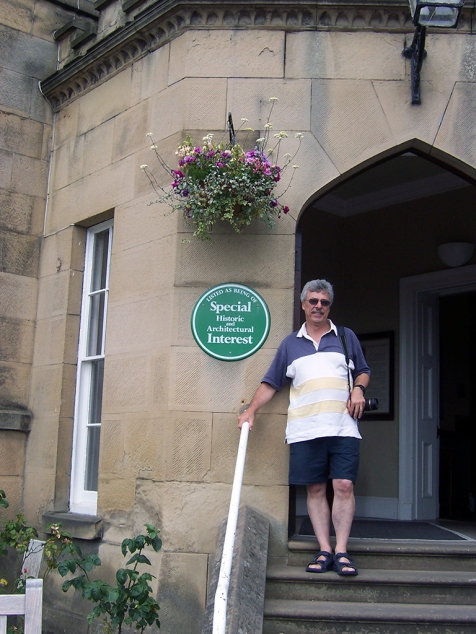 Me outside the castle entrance, 2006 © Robyn Swadling

The most striking feature is the Well Gallery, an oval gallery with a glass dome situated in the centre of the building, with cantilevered galleries on the first and second floors. An Adams archway leads through the building towards the Well Gallery, whilst the Music Room, Drawing Room and Dining Rooms all contain their original Adams fireplaces. 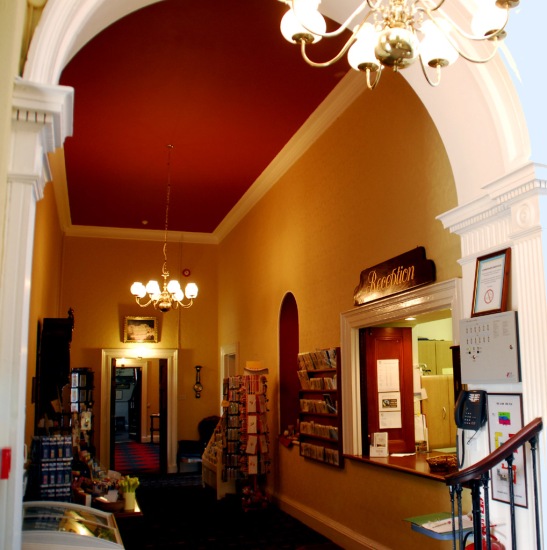 So, there it is, a little about how I entered this world and some history associated with it.

6 thoughts on “Some history around my entering this world”