This piece reviewing a photographic exhibition by Ian and Roger Skinner and shown at The Queanbeyan Hive from 28 October to 14 November 2019 was submitted to The Canberra Times on 8 November for consideration for publication. Sadly, the response was “I really liked your piece about Coast! But the show finishes too soon for us to run it – it would be finished by the time we publish it…”

So, I am publishing it (unaltered) here instead:

This was my first visit to The Queanbeyan Hive; a delightful small gallery in an old house replete with pressed metal walls. I will visit it again. This exhibition filled just two rooms, with diverse artwork in the remainder.

I have a copy of Roger Skinner’s magnificent book ‘A Life in Light’ celebrating 50 years of his photography. I have seen his brother Ian’s images on the walls at the Huw Davies Gallery at Photo Access in Manuka. So, I was looking forward to this exhibition. Ian too has published books; I should add one of them to my collection.

What does the coast mean to you? Is it primarily places where you go to spend time on the beach or in the ocean? Do your childhood memories include building sandcastles, exploring rock pools looking for crabs, and first attempts at catching a wave? Do your family photo albums include shots of people in strange costumes? I even have a couple of images that include my grandfather wearing his bowler hat during family visits to the coast.

The coast is the land along the edge of the sea; a place where saltwater, sand dunes, shells, crabs and bluebottles are present. It’s also a place where humans build docks and harbours, cause pollution and leave waste.

Both Skinners live inland, in Canberra and Muswellbrook respectively. To create this exhibition, they chose to travel to observe the coast. In their exhibition proposal they wrote “An observation by a person who doesn’t live in constant touch with the ocean is an odd experience, There is of course a novelty – separated from their familiar eucalypts and dried, rolling hills, there comes a sudden rush, where everything is new and different, but then also and beyond that, comes the touch of the very measured eye. With a constant re-referencing separated by monthly or daily re-examination of these places. And things happen. The brain becomes more focussed and the eye sees thing differently. Very differently.”

There is a particular connection between brothers. These two have finally got around to holding this joint exhibition which brought them together visually. The exhibition affords these two artists the first joint exhibition in their lives as photographers, ever! Having been photographers for fifty plus years each, this affords a rare opportunity to see the output of these two brothers working remotely from one another, on a theme, that is physically remote from their regular inland homes. They are presenting their responses to their chosen coast locations.

Ian’s images are of Guerrilla Bay, on a part of the nearby South coast. I know it well and most readers probably do also. It is only 500m wide, East facing, bordered on the South by Burrewarra Point. It has rock platforms and gullies. Ian’s landscapes display the ocean-sculpted shapes and what he describes as “natural jewellery gathered in crevices, and tenuous flotsam arranged as if in a gallery on the sands.” If we’ve been there, have we seen Guerilla Bay as Ian has? 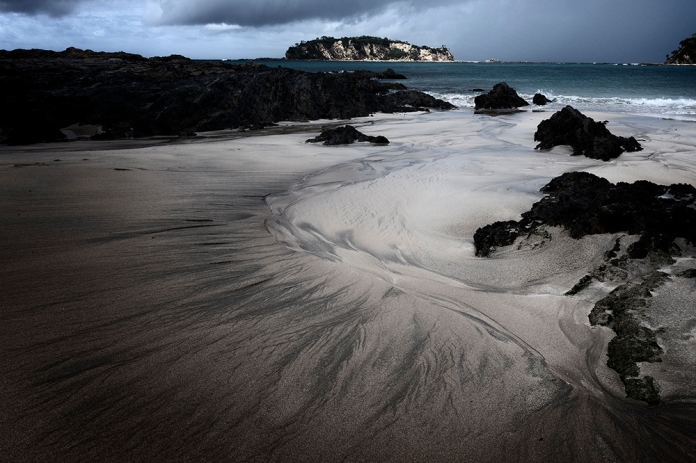 To the Island © Ian Skinner

Roger’s images are from the West Coast of Flinders Island. I’ve never been there. I know the island is in Bass Strait. I’ve been told it is beautiful, wild and rugged. Roger is showing us Zen observations of isolated smooth granite boulders, resting in sand, tide marked and covered in red lichen. If we visited there, would we see it as Roger has?

I am delighted that these brothers are sharing their great printed imagery with us. We who are photographers must all learn to see when we look. I will see more when next at the coast.