Every quarter I write a piece for the APS Focus page in Australian Photography magazine. This is my latest piece, published in the March 2018 issue now in newsagencies.

What is Contemporary photography?

That is the question that I get asked more than any other in my role as Chair of the APS Contemporary Group.

There is no simple answer. Indeed, it generates an incredible amount of discussion amongst the Group’s members and, particularly, amongst members of the Friends of APS Contemporary Group Facebook group. The debate flares up again seemingly every time we get a new participant in that Facebook group who asks for advice. The discussion that ensued following the announcement of the 2017 Olive Cotton Award was incredibly vigorous, but most worthwhile because it opened a needed conversation.

Roger Skinner was behind the creation of Contemporary Group in 1993 and he was its inaugural Chair. His idea was that the new group would extend beyond the realms of art photography and promote the appreciation of photography as a communication medium. In his 2002 annual report, Skinner wrote “The group are quite happy with the definition of Contemporary as basically anything they don’t see in Image magazine.” Image was then the Society’s monthly magazine.

In her preamble to the Contemporary Group presentation at APSCON 2003, the next Chair, Kay Mack, said “It is difficult to find a neat phrase to cover the subject as Contemporary photography encompasses such a wide range of photographic media and concepts. If you visit any of the Contemporary photographic galleries in our major cities you will see anything from photograms, to images made with a pinhole or toy camera, to the older processes like cyanotype, to huge digitally-produced prints, to video clips and interactive computer-based programs. You will find straight documentary work, often supported by the written word, abstracts, collage, and illustrations of concepts as far “way out” as you might imagine. You won’t be alone if you admit to understanding and appreciating only some of what you see. But that’s always been the way with contemporary or modern art of any era. There has to be someone breaking new ground who is out in front of public taste. Some of the work will survive. Some of it won’t.”

Responding in 2017 to a query by a new member of the Friends Facebook group, Mack said “For me the image … or preferably the group of images … need(s) to be an expression of an idea or a concept that is important to the photographer. This could be something of purely personal significance or of something that has global attention. The way in which the concept is expressed is secondary. The photographer is free to use any techniques in his/her repertoire. This includes titling and accompanying words to support the concept.”

This year, the Group’s members have been invited to submit works for an exhibition of Contemporary faceless self-portraits. It will be held during the 2018 annual convention of the APS at the Gold Coast Arts Centre from 11-16 September. At the time of writing twenty-one members have expressed interest in participating and most have commenced developing their ideas. The task, of course, is to reveal something of themselves. Responding to one query by a participant I said “the idea ….. was intended to make us all think about how we might represent ourselves in a self-portrait. My face, indeed my physical appearance generally, doesn’t tell anyone much about who I am. The clothes I’m wearing might say a bit – but what do I do, what do I believe, what are my opinions, etc.”

A selection panel will be set up to choose which of the submitted works will be included in the exhibition. I am looking forward to seeing an eclectic group of 2 and, maybe, 3 dimensional images and installations on display. No doubt some of the traditionalists attending the convention will be bemused or even think some participants have created very strange works. However, I am also hopeful that some more converts will join Contemporary Group and start working in the fascinating and challenging field of Contemporary photography.

I am planning to lodge one or more works for consideration for the exhibition, but right now have only just commenced thinking about what I might create. The image accompanying this article is not a self-portrait; it is a portrayal of the sense of crowdedness I felt at an exhibition opening. 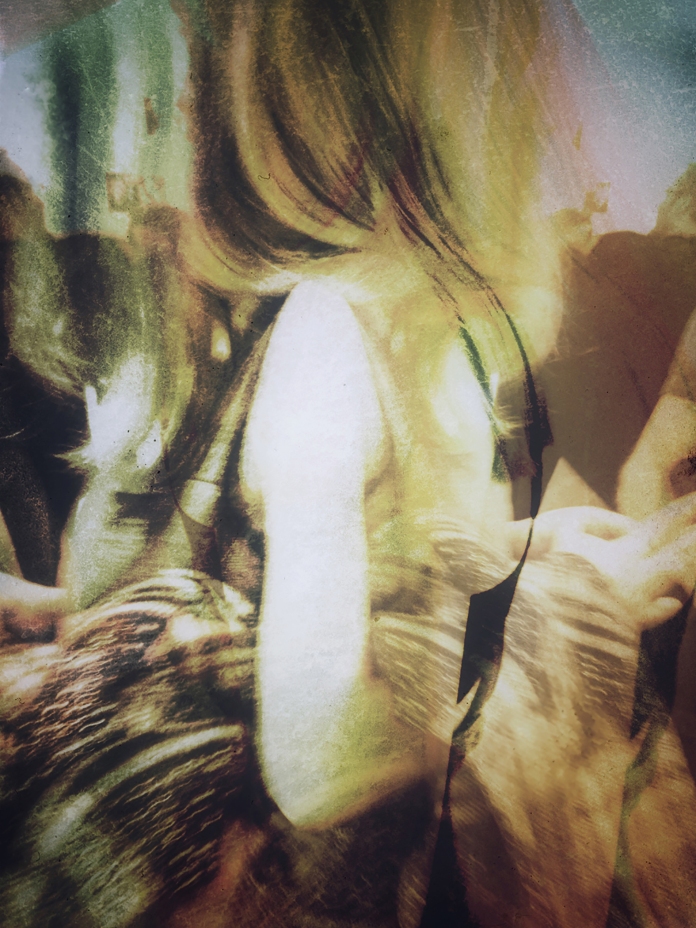