Many years back a friend gave me two glass plate negatives that she had found in a second-hand shop and which she thought I would like because of my interest in photography. It is only now that I have put any effort into identifying the buildings depicted in the images. 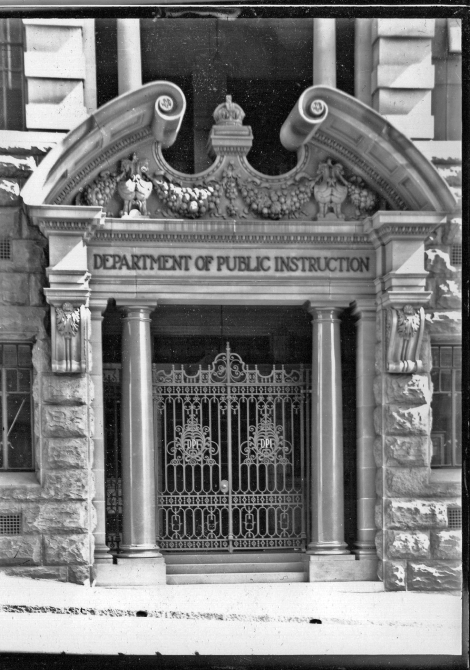 It was remarkably easy to establish that the above image of the entrance to the Department of Public Instruction is of “a sandstone building that symbolised the civic virtues of public education” at 35-39 Bridge Street, Sydney. The entrance is still the same, except for the name of the occupying department being Education, as can be seen in the image below by Pware – Own work, CC BY-SA 3.0, https://commons.wikimedia.org/w/index.php?curid=25646817.

The large and heritage-listed Edwardian Baroque public building was designed by Colonial Architect George McRae and built in two stages, the first completed in 1912, with John Reid and Son completing the second stage in 1938. It is described in a section about colonial state education in the Dictionary of Sydney Website’s section about education: https://dictionaryofsydney.org/entry/education. This is an excerpt from it:

“The opening of the university created the need for a ‘feeder school’. With encouragement from the University professors, the colonial parliament enacted legislation which founded and endowed Sydney Grammar School, opened in 1857 on the College Street site the university had just vacated.

The establishment of the university and the endowment of Sydney Grammar School were indicators of the growing role of the colonial state in secondary and higher education. It was the same in elementary education. From 1848 the National Board of Education competed with the ‘denominational schools’ of the churches. By 1866 the old name of ‘national’ schools, associated with the now failed educational experiment in Ireland, had been replaced by ‘public’ from a local Australian perspective. It was a clear indication that the schools of the state, just like the university, were being designed to serve ‘public’ interests.

From the 1850s, colonial governments founded many solidly built Gothic-style public schools as a statement of commitment to civic pride and the common good. Many were opened in the city and nearby suburbs. Such schools as Cleveland Street (1856) and Bourke Street (1866), both of which still stand today, were demonstrations of the authority and resources of public schools over the less impressive school buildings of the churches.

At the peak of the public-school system was Fort Street Public School, opened in 1850 just above The Rocks on Observatory Hill. Established as a model training school for teachers, Fort Street soon achieved outstanding results at the public examinations administered by the University of Sydney. Fort Street and similar state-provided schools became ‘superior’ public schools offering a form of secondary education for ‘free’.

With the universal male franchise came a clear view that education in a common school should be the basis of a common citizenship for most social classes. This was a challenge to the churches, particularly the Church of England and the Roman Catholics, who continued to maintain their own school systems with the assistance of state aid and in competition with the public schools of the state. While the church schools were often designed for the poorer classes, state administrators such as William Wilkins knew that many middle-class parents in Sydney had come to prefer the public schools as providing the ‘best’ education.

These issues came to head in the 1870s, culminating in the 1880 Act which removed all state aid from church schools and established a Department of Public Instruction. It was soon based in Bridge Street, Sydney, in a sandstone building that symbolised the civic virtues of public education.

The Church of England agreed to give up its elementary schools (while moving more into establishing secondary schools) in the interests of common Protestantism. But the Roman Catholic Church rejected this settlement and condemned all public schools as ‘irreligious’ even though they still taught a form of non-denominational Christianity and allowed the churches some access. A great religious and cultural divide was created in Sydney, as in the rest of Australia where similar arrangements prevailed. Where you went to school almost mattered more than where or whether you went to church. Public schools had lay teachers; Catholic schools survived through having the ‘religious’ as teachers.”

The second glass plate negative image (below) that was given to me shows the drinking fountain at 1A Prince Albert Road in Sydney with St Mary’s Cathedral in the background across St Mary’s Road. It took me a little longer to identify that location. A friend has suggested the cars look like the 1930s.

The February 2017 image below, by Robert Porter and found on Google maps, clearly shows the same location. 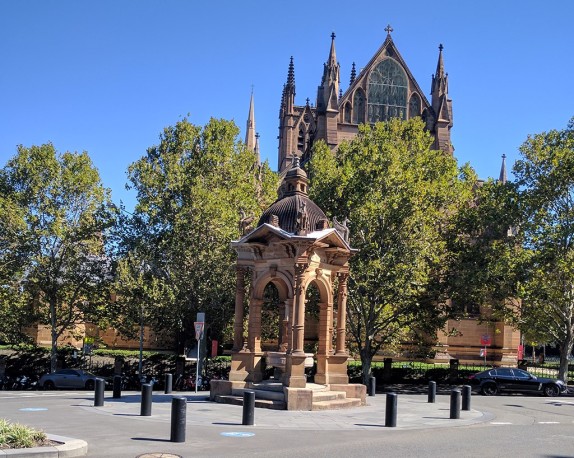 The NSW Office of Heritage and Environment website refers to the water fountain as the Frazer Memorial Fountain. It also says: “Historically significant as a manifestation of nineteenth century philanthropy, this edifice is one of the few intact remaining drinking fountains in Sydney. Demonstrates earlier aspects of daily life in relation to water supply and usage as well as public health and hygiene. Long association with parks gardens and pleasure grounds. Aesthetically significant as a good example of baroque-inspired Victorian Gothic sandstone fountain. Socially significant as a source of drinking water as well as a meeting place prior to the universal provision of reticulated water.” It also describes it: “Elaborate baroque-inspired sandstone drinking fountain. A good example of an ornate sandstone covered drinking fountain, it features Pyrmont sandstone and specially imported Aberdeen granite in the water basins. The fountain is set on a square base from the corners of which arise four pilaster/column groups which support the wide arches. There is a crenellated spire surmounted by a lantern and steps at the base of the fountain which give access on each side to the area where the water basin formerly stood.” And finally, it indicates: “The fountain was fully restored (excluding water feature) in 2003.”

The Website http://www.cityartsydney.com.au/ tells us that it “is the second of two Frazer drinking fountains donated to the city by John Frazer MLC, a wealthy businessman and philanthropist. The fountains are both made of fine Pyrmont sandstone and were installed in 1881 and 1884 respectively. While both fountains were designed by City Architect Thomas Sapsord and sculpted by Mittagong sculptor Lawrence Beveridge, they are very different in style. This fountain – the second – was erected in 1884 at the outer perimeter of the Domain on Mary’s Road (opposite the northern end of St. Mary’s Cathedral), where it remains today. Its Baroque style is very ornate and contrasts with the simple Gothic lines of the first Frazer Fountain, located in Hyde Park. Like its forerunner, this fountain features Pyrmont sandstone and specially imported Aberdeen granite in the water basins. The dolphin taps and drinking cups that once featured have long since vanished but the high sheen of the granite basins remains. The original handrail surrounding the fountain has also been removed, though a section of it was still standing in 1983. Unlike the first fountain (which has had its taps and drinking cups replaced with a bubble fountain in keeping with changing attitudes towards health and hygiene) a resolution of the Council in 1936 to replace this fountain’s dolphin taps was not carried into effect.”

There endeth the history lesson!