I find that a useful thing to do is to gather images on a theme. Whenever I am out with my camera some particular themes are in the back of my mind – as well as whatever else I am specifically looking at photographing on that outing.

I find that, in the same way we look at things like light to see just what it is doing and, so, recognise a good image that the light is creating, I will notice something that fits one of my themes and might be a worthy addition to my collection.

There are all sorts of themes that we can work on – shadows, windows, whatever is the set subject for a forthcoming Canberra Photographic Society competition. The list is really endless. One of the themes I have explored on and off over many years is Glimpses.

The dictionary definitions of Glimpse include:

2.    A momentary or slight appearance

Storytelling is a very important aspect of much photography. If the viewer can weave a story around what they see in the image, then the photographer has succeeded in capturing their interest. I consider that the theme, Glimpses, provides an excellent vehicle for storytelling.

Here are some of my images on the theme of Glimpses. All of them were taken when I was traveling to other parts of Australia or overseas, times when my main focus was on gathering travel images. The concept of what constitutes a glimpse is interpreted variously, but each image shows a glimpse of one or more persons and, I feel, allows the viewer to invent a story about what they see.

In the image above we see just a glimpse of the young boy as he plays his own game, blissfully unaware of the scene behind him. It is a passing look of him as he moved quickly across the view through my lens. But what is it about? What was he actually doing? What is the setting? Why was he doing what he was in that setting? What were the other people behind him doing? 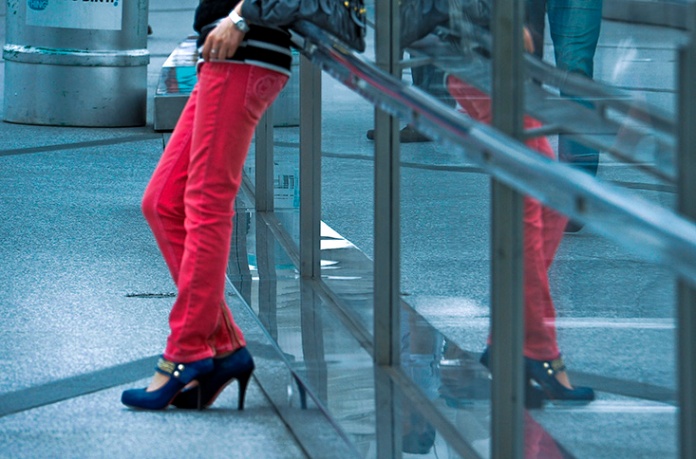 Here we glimpse only the lower half of a person and can do no more than speculate as to what the other half looks like. Do we have an inkling of what the upper half might be like? Is it definitely a woman? What was she doing? 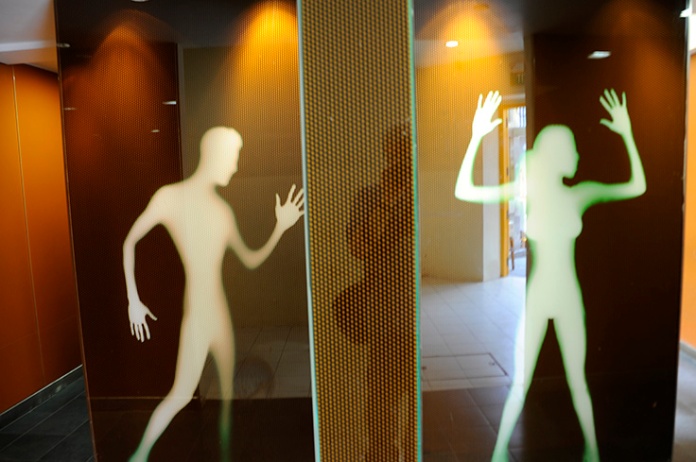 This is a glimpse of my reflection between two glimpses of human forms holding stylised poses – for my camera? The viewer sees only a vague idea of me, the photographer. 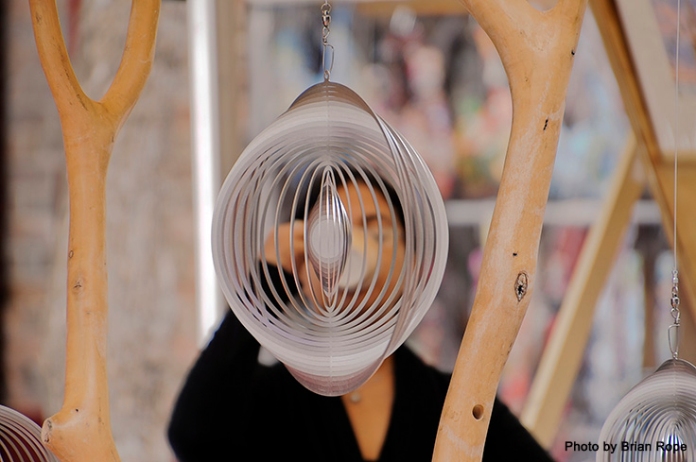 As she is hidden behind one of her wares on her stall at the markets, we only have a glimpse of this stall holder and need to imagine what she really looks like. Without the title, would you know she was a stall holder? What story would you attach to the image with no written information to accompany it? 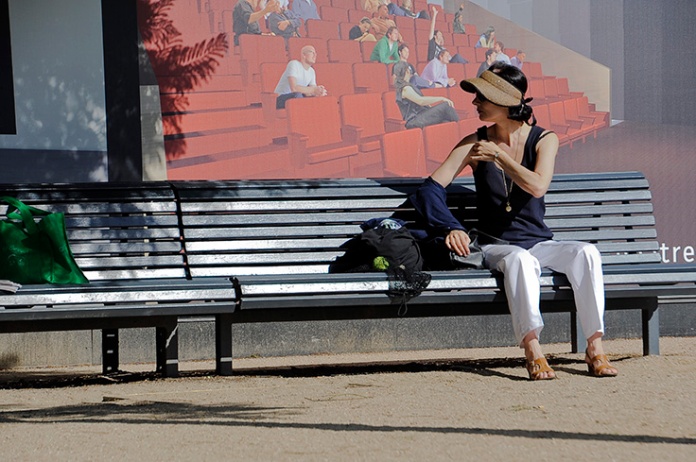 Glimpse – who is watching?

The woman on the bench appears to be taking a passing look over her shoulder at the people in the mural, who are not looking at her. Is she glimpsing them, whilst we are glimpsing her? Are we certain she is real, or is she a sculpture? Indeed, are the bench and her also part of the mural? 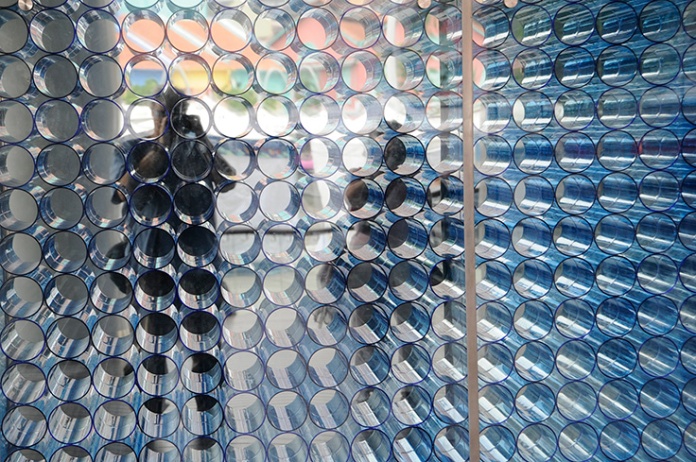 This image provides a glimpse of me and another person, both in the form of reflections. You can make out my camera. Was the other person also taking a photo – or watching what I was doing – or just there? 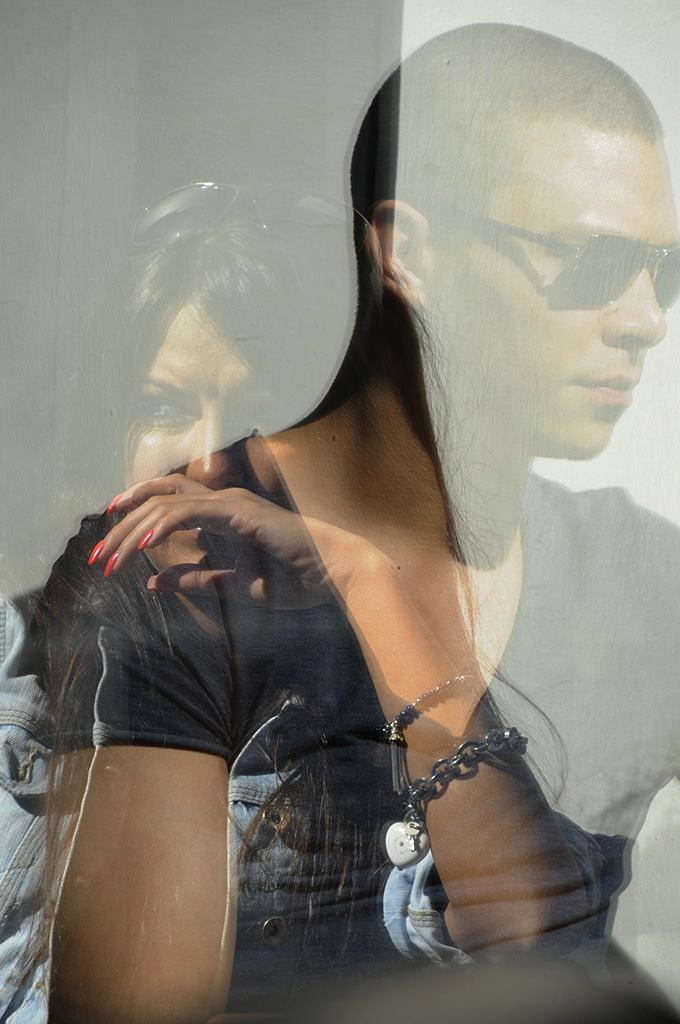 This couple was seated together against two separate reflective surfaces which created this image. For me, the glimpse of them, via their reflections, poses questions about their relationship. 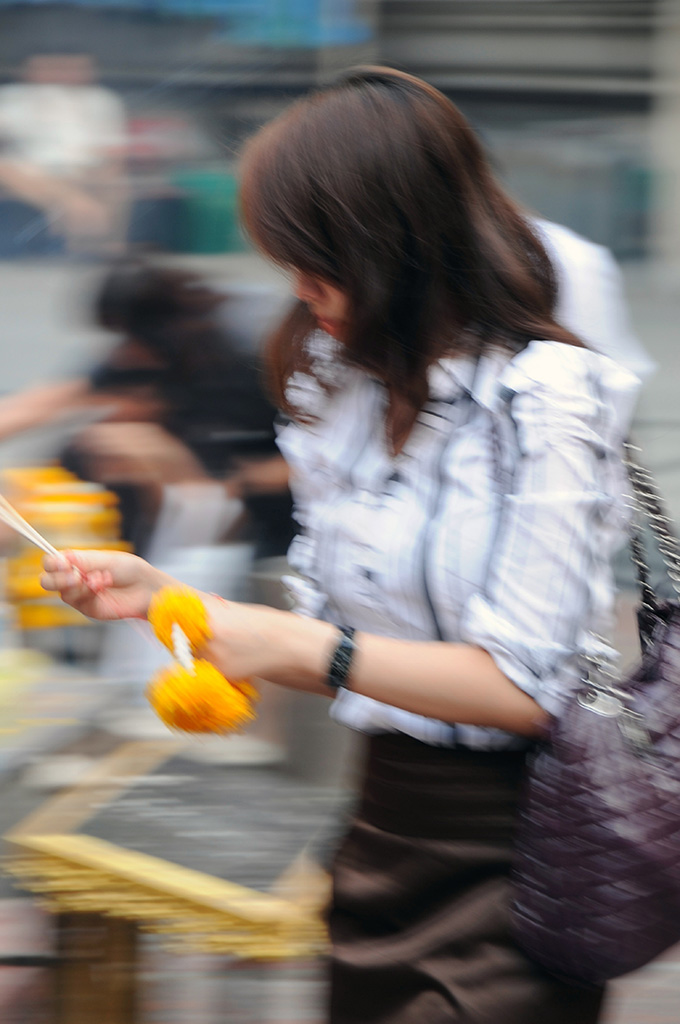 Dressed smartly and possibly on her way to work this woman paused briefly at a public shrine. The blurred image seemed appropriate for the speed at which she made her offering and provides just a glimpse of her. 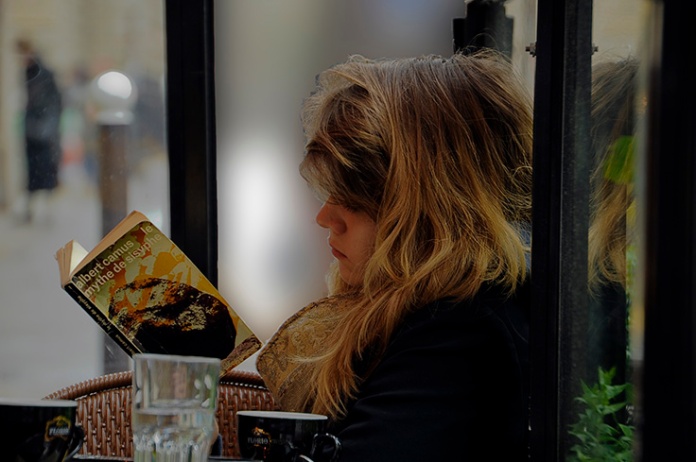 We gain an inkling of something about her from this glimpse of a young woman in a Champs-Elysées café. Her taste in books incudes at least one classic. Does it include more of the same, or was she only reading it because it was a set text for a course of study she was undertaking? 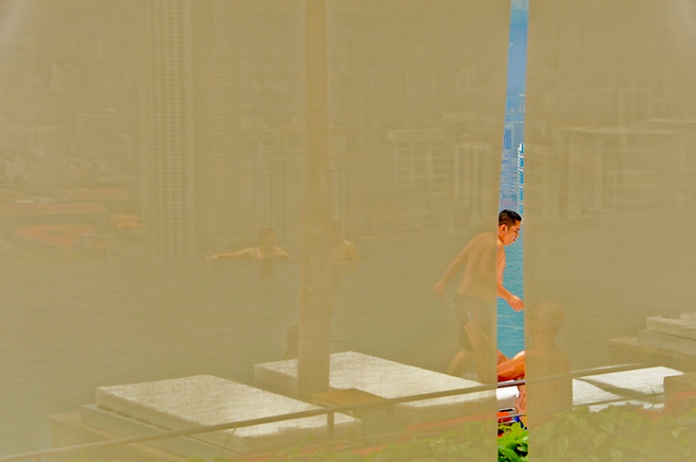 On the roof of a 56 floor hotel/shopping mall building in Singapore there is an edge pool for hotel guests. Other visitors to the building can glimpse users through screens (and the gaps between them) – voyeuristically? here we see a momentary view of this man as he passed the gap where my camera was positioned. 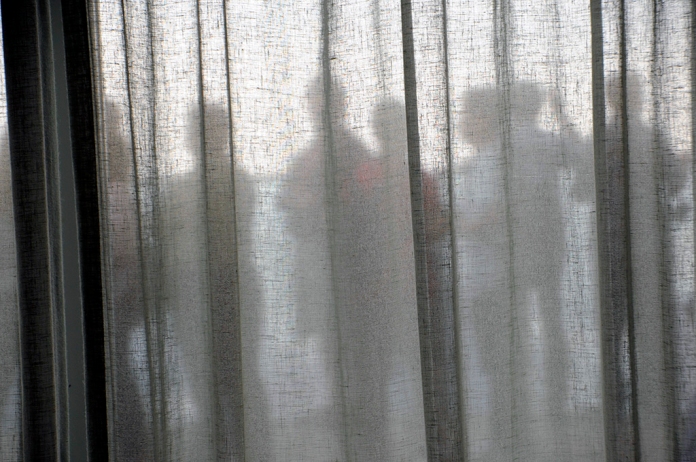 We can do no more than glimpse all these people through the translucent curtain fabric. We can only speculate as to who they were and what they might have been doing. 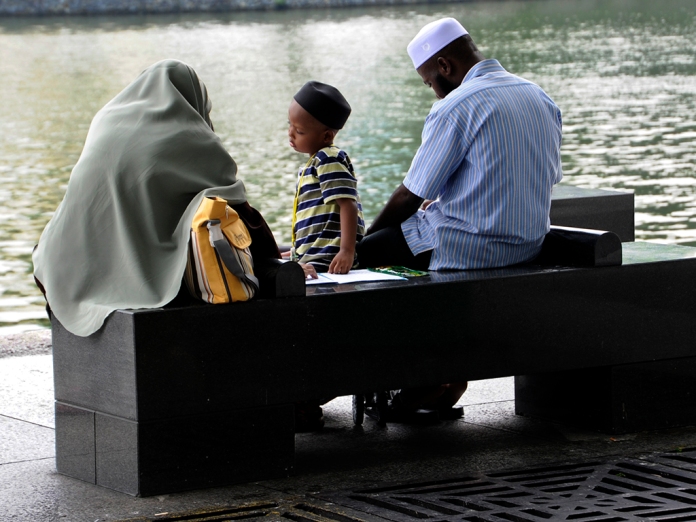 In this passing look at them, we view enough to learn about this family’s faith and that they have at least one child, but little else about them. It is merely a glimpse of this family. 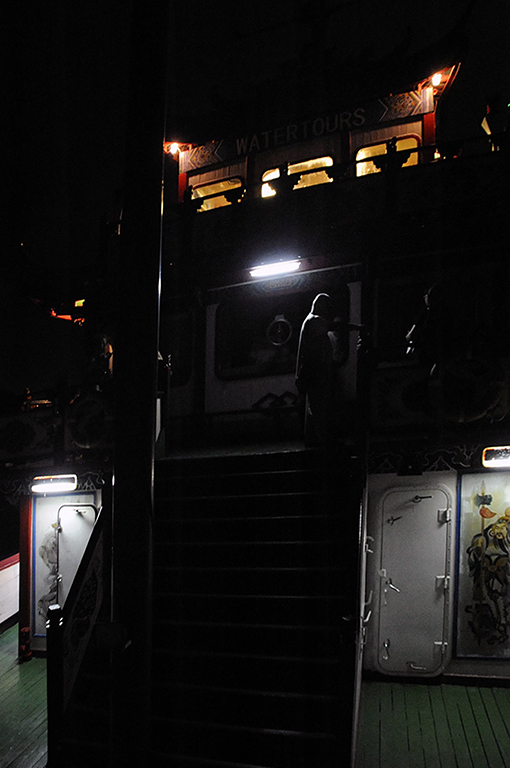 In the darkness we barely glimpse a figure or two. We learn nothing about them. Are they men or women? Where are they? Is that a boat they were on? If so, where was it – and they – going at this apparently late hour? 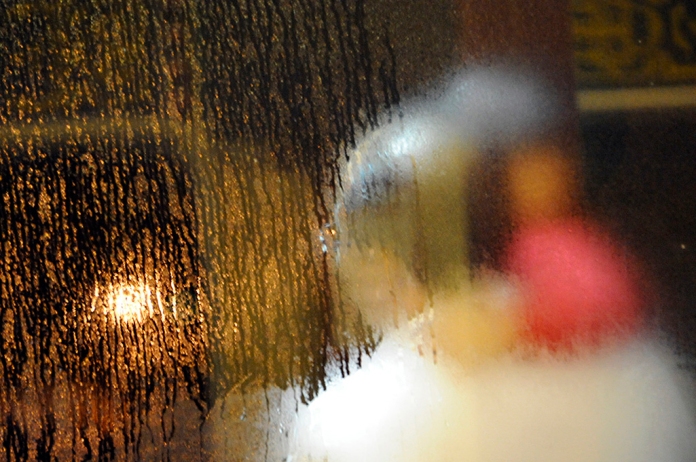 In this glimpse through a wet window we see that the man wears spectacles and, probably, sufficient of his head to take a reasonable guess at his race. But what more can we glean or invent from the image? What was he doing? What is the pink shape? What is the bright light? Was there anyone else with him? Write your own story.

In this glimpse of a woman we see just enough to tell us that she is being served tea by a waiter in a smart-looking venue. We do not know who she is, why she was alone or why she was even there.

Each of the Glimpse images above may conjure up quite different stories for you to what I have briefly suggested below them, and different ones again for each other viewer. That doesn’t matter. The important thing is to explore themes for yourself and, so, look at everything around you when out and about with a camera (or even when you don’t have a camera with you). When we observe we substantially improve our prospects of capturing interesting imagery.